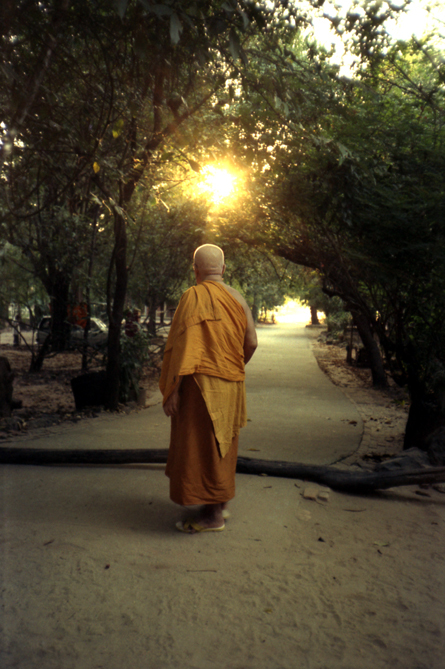 Buddhadāsa Bhikkhu (Servant of the Buddha) went forth as a bhikkhu (Buddhist monk) in 1926, at the age of twenty. After a few years of study in Bangkok, which convinced him “purity is not to be found in the big city,” he was inspired to live intimately with nature in order to investigate Buddha-Dhamma in study and practice. Thus, he established Suan Mokkhabālārama (The Grove of the Power of Liberation) in 1932 near his hometown of Pum Riang (now in Chaiya District). At that time, it was the only forest Dhamma Center and one of the few places dedicated to vipassanā meditation in Southern Thailand. Word of Buddhadāsa Bhikkhu, his work, and Suan Mokkh spread over the years so that they are easily described as “one of the most influential events of Buddhist history in Siam.” Here, we can only mention some of the most interesting services he has rendered Buddhism.

Note: He used bhikkhu (originally “mendicant renunciate,” later settled “monk”) as part of his pen name, while ajahn is as a common form of address for monks and other teachers.

Ajahn Buddhadāsa worked painstakingly to establish and explain the correct and essential principles of what he called “pristine Buddhism” or “the heart of Buddha-Dhamma,” that is, the original awakening realizations of Lord Buddha before it was buried under commentaries, ritualism, clerical politics, and the like. His work was based in extensive research of the Pāli texts (Canon and commentary), especially of Buddha's discourses (suttas), followed by personal experiment and practice with these teachings. He then taught whatever he could say truly quenches dukkha (dissatisfaction, distress, suffering). His goal was to produce a complete set of references for present and future research and practice. His approach was always scientific, straight-forward, and practical.

In his time, Ajahn Buddhadāsa was revolutionary for preferring the Pāli language record of Buddha’s discourses, especially what struck him as the earlier, more authentic strata, over the commentaries and so-called Abhidhamma that developed in later centuries and flourished as Buddha-Dhamma spread through various schools, including what fairly recently came to be known as “Theravāda.” His playful provocations of rigidly orthodox sectarians gave him many opportunities to practice equanimity. The criticisms and personal attacks became dust in the winds of time as he remained true to the genuine heart of Buddhism, as he often spoke of the liberative teachings centered in selflessness, dependent coarising, emptiness, the “karma that ends karma,” and the middle way of release from all manifestations of “me” and “mine.” In fact, he was chosen to give an important keynote address on behalf of the official Thai monastic delegation to the Sixth Council held in Rangoon in 1954.

Although his formal education only went as far as ninth grade and beginning Pāli language studies, he was given numerous Honorary Doctorates by Thai universities. His books, both written and transcribed from talks, fill many shelves at the National Library and influence all serious Thai Buddhists in Siam. Doctoral dissertations are still being written about him and his legacy. His books can be found in bookstores around the country and are favorites as gifts at cremations.

Progressive elements in Thai society, especially the young, were inspired by his teaching and selfless example. Since the 1960's, activists and thinkers in areas such as education, ecology, social welfare, traditonal medicine, and rural development have drawn upon his teaching and advice. Most of the monks involved in nature conservation and community development were inspired by him. Through his exposition of “Dhammic Socialism,” he provided the link between the scriptural tradition and engaged Buddhist practice today. 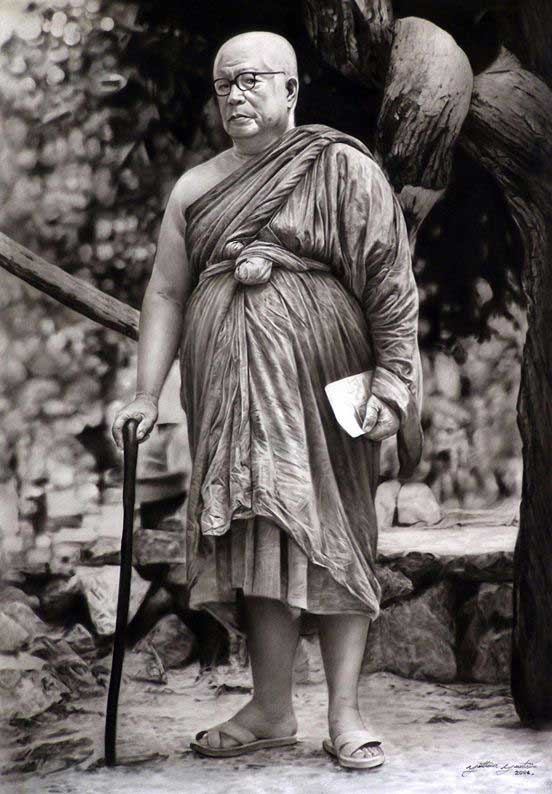 After the founding of Suan Mokkh, Buddhadāsa Bhikkhu studied all schools of Buddhism, as well as other major religious traditions. This interest was practical rather than scholarly. He sought to unite all genuinely religious people in order to work together to help, as he put it, “drag humanity out from under the power of materialism.” This broadmindedness won him friends and students from around the world, including Christians, Muslims, Hindus, Confucianists, Sikhs, and Jews.

The last project Ajahn Buddhadāsa guided was to establish an International Dhamma Hermitage in a quiet coconut grove across the Asia Highway. This addition to Suan Mokkh is intended to provide facilities for:

Ajahn Buddhadāsa died in 1993 after a series of heart attacks and strokes that he repeatedly bounced back from in order to teach. The final stroke occurred as he was preparing notes for a talk to be given on his 87th birthday in two days (27 May). Suan Mokkh carries on in the hearts and actions of all those who have been inspired and guided by his example and words. Suan Mokkh is not so much a physical place as it is the space of liberation that we all must discover in this very life.