Excerpt from an article written by Buddhadāsa Bhikkhu on 10 August 2502 (1959) and published by the Dhammadāna Foundation in ธรรมานุสรณ์ Dhamma Teaching for Ending of Suffering – Dhamma about Death (มรณานุสติธรรม), pp. 65-72. Translated into English by Tan Dhammavidu and e-published on the 27th Anniversary of the cremation of Tan Ajahn.

DEATH IS THE LOCUS OF ALL FEARS

Death is the great danger threatening ordinary people. Death, both physical and mental, forms the locus for fears of all kinds: fear of wild beasts, reptiles, ghosts, disease, of pain, of loss of one’s livelihood, of one’s reputation, of poverty and so on, including fear of death in its ordinary forms, or in some undignified, infamous form, like moral or spiritual death.

If there were no fear of death, there’d be almost no fear of anything and we’d dwell with a peaceful, a cooled mind, hence cleansing away any and all problems associated with death, making death meaningless, should be of great interest. If someone could really achieve this feat, it would make their life into a win only experience. One who really knows that there is no death, that one reaps the greatest good. So, how can we overcome the fear of death, or render the concept meaningless?

THE CAUSE OF DEATHLESSNESS

The feeling of being deathless may display several characteristics and arise from various causes, all of which can render one, more or less, dukkha-free. It all depends on whether the underlying causes of this experience are born of right understanding, sammādiṭṭhi, or of wrong understanding, micchādiṭṭhi – although, even though based in right understanding, the experience will still display shallow and profound, elevated and baser modes depending on the level of knowledge involved.

DEATHLESSNESS WHICH IS BASED IN MICCHADITTHI, WRONG UNDERSTANDING

Animals and smart and ruthless criminals afflicted by the defilements of dosa and rāga, aversion and lust, will have little or no feeling about death, hence little or no fear of it either, and can therefore face death without experiencing undue dukkha. Hence it would be relatively easy for a military commander to encourage his young soldiers to be without fear of death. He could, for instance, arouse their rāga, their greed, through encouraging the stimulation involved in sexual violations, or by invoking their patriotism, their debt to their ancestors, or by prodding their personal feelings of honour. He could arouse their dosa, their hatred, aversion, by provoking them into hot anger and the desire for vengeance. He could encourage their moha, their stupidity, their delusion, through propagating theories like that which postulates that there is no death because the ātman, the soul, cannot die, or that which tells us that the ātman, the soul, can’t be hurt or affected by any physical experience, or that it can’t be made to change in any way at all. All of this, because it tends to debase the human condition, because it makes human beings less human, can remove the fear of death or dispel the notion completely. But this would still be defiled, still be based, more or less, in wrong understanding, in micchādiṭṭhi, and we should consider the deathless in a more refined and careful way, taking into account that death which isn’t ‘death,’ which is cooled, which is in no way hot and bothered.

DEATHLESSNESS BASED IN SAMMADITTHI, RIGHT UNDERSTANDING

The deathless that is based in sammādiṭṭhi, in that right understanding which is still on the worldly, the lokiya, level, will involve the belief in kamma, in merit and demerit, in good and bad, in heaven and hell, etc., will also take in the certainty that one has done the right things with regard to death and the hereafter, and will include the belief that death is just ‘a change for the better,’ a continuance, from which there’s nothing to fear, it being better than continuing to experience the torment of living in this old worn-out body with its pains and sicknesses. There’ll also be the understanding that for so long as the fruits of kamma, merit and demerit, exist for us, we’ll continue to cycle around, hence death will be seen as affording one the opportunity of doing better, going higher in a new and slicker body and mind combination. Death is, therefore, just an advance to a higher level for those who truly keep to the good.

When people have only good, beautiful, proper feelings, when there’s equanimity and the mind is luminous, clear and bright, they’ll forget all about their body and about death. The mind being dominated by Dhamma, the feeling will have arisen that, for me, there now truly is no death. The physical body is then of little or no consequence, there’s only the mind consisting in that Dhamma which doesn’t know death. Hence there’s no fear of death, nor are there any of those problems usually associated with that concept; disease also loses its meaning, and any partner or children cease to be matters for concern, for anxiety, even when we have to be apart from them, because we no longer see them as prone to death either. This might arise in both religious and non-religious cases, but when a good result occurs and people become interested, become followers, it will become something religious.

THE MIND UNDERGOES CHANGE IN ACCORD WITH ITS SURROUNDINGS

Because the mind isn’t ‘self,’ it changes in accord with its environment; any ‘environment’ being made up of nothing more than thought, received knowledge, and belief, which it increasingly meets with up until life comes to a close. These ‘environments’ lead the mind into various levels of either micchā or sammādiṭṭhi. Now, each level of sammādiṭṭhi is like a device which acts to make the mind suitably smoother, calmer, more and more untroubled, while succeeding levels of micchādiṭṭhi serve only to render the mind more and more unstable, confused, and reckless. When the mind is guided by right beliefs, and by mindfulness and right knowledge, it can overcome the threat that death poses.

Birth and death, or arising and quenching, is just the flowing on, the cycling around of causes and conditions.

A device which is just a wise method able to raise the mind above death must be a matter of ultimate truth, hence it falls to the duty of sammādiṭṭhi on the transcendent, or lokuttara level to be capable of experiencing aniccaṃ, dukkhaṃ, anattā, and, especially, suññatā, with clarity. Seeing the anattā quality of the mind and body brings recognition of the truth that the mind isn’t ‘self,’ isn’t ‘me’; it’s just a nāmadhamma, just a natural process operating in combination with a rūpadhamma, and void of anything that could be called a ‘self.’ Further: birth, or ‘arising,’ is just the stream, the flowing-on – that spinning around which will continue until the causes and conditions promoting it cease. We understand that it’s ‘me’ that is born and dies because we misunderstand this process. In the end, the arising and quenching of the mind which, ultimately, is the right and correct form of birth and death, still isn’t birth and death in itself; it’s just the flowing on, the spinning around of things which are really just nature under the power of various causes and conditions.

‘DEATH’ DOESN'T EXIST FOR THE MIND THAT EXPERIENCES SUNNATA PROPERLY

The ending of the causes and conditions supporting all the flowing and spinning has its roots in the true experiencing of suññatā, of ‘voidness,’ that is, that nāmarūpa, or all things, are altogether without anything that could be called ‘self.’ This makes us realise that there is no ‘birth,’ and if nobody gets born, then how could anybody die? Hence there is no ‘death’ because there’s no ‘arising,’ no ‘persisting,’ and no ‘ceasing,’ or ‘quenching away’ either. Seeing in this way doesn’t just cause ‘birth’ and ‘death’ in the ordinary sense to lose any meaning, but puts an end to the foolish ‘arising’ and ‘quenching’ of the mind too. How can the mind arise and quench without the feeling being present that it’s ‘me’ who ‘thinks,’ who ‘feels,’ who’s ‘pleased,’ who’s ‘displeased,’ who’s experiencing dukkha, who’s experiencing sukha? In the end, where will ‘death’ come from? Seeing suññatā marks the ending of ‘self’-belief for this particular person, which means that everyone else is now understood in the same way. There’s only the flowing-on of nature. The mind doesn’t have any feeling that ‘I’ was born, that ‘I’ exist, or that ‘I’ will die, hence there’s no death, death doesn’t exist for the mind which experiences suññatā properly.

Why do we use the word ‘properly’? For the reason that the suññatā which isn’t proper, which is a product of micchādiṭṭhi, and which isn’t consonant with Buddhism still exists. Some doctrines hold that the mind is amata, is deathless, doesn’t know death, and only the body will die, so that this mind tends, when the time comes, to seek for a new platform, a new body. Such a doctrine, however, isn’t Buddhist and runs contrary to the principle which has it that there is arising, persisting, and ceasing by denying the ceasing factor, which is amusing, because mind spins in a continual cycle of arising, persisting, and ceasing, or quenching, until the causes and conditions which support that activity disappear. Throughout all of that there’s really no ‘me’ involved, even for one moment, and when this truth is experienced, the mind will quench. ‘Death’ doesn’t actually exist, because it comes from ‘us.’

As regards the amata, the deathless, this isn’t the province of the conditioned mind. It’s something natural, as opposed to being something conditioned, and will be experienced once the mind has truly put an end to the ‘self’ illusion; because then it will be realised that the mind has no essential element, neither does it belong to anyone. It’s just a nature which flows and spins; since amata doesn’t flow and spin then, in Buddhism, there cannot be a deathless, or an immortal mind; there’s only the mind which can clearly experience the deathless, the amata – at which point it ceases to be ‘me’ because it becomes simply nature, just as all ‘things’ are. Mind attaining to ultimate knowledge naturally knows the deathless as it is, and also knows that which doesn’t know death, so where would death come from?

One might get a good result from this if it’s read late at night, but it will need to be reviewed several times, and perhaps considered continuously until the experience of deathlessness really arises. Because the experience of deathlessness can display, as mentioned, several levels, it could, depending on the circumstances present at the time, come ‘out of the blue,’ so to speak, and could therefore produce a variety of results, both shallow and profound. So, there’s no death when there’s no birth, and no birth when there’s no ‘self.’ 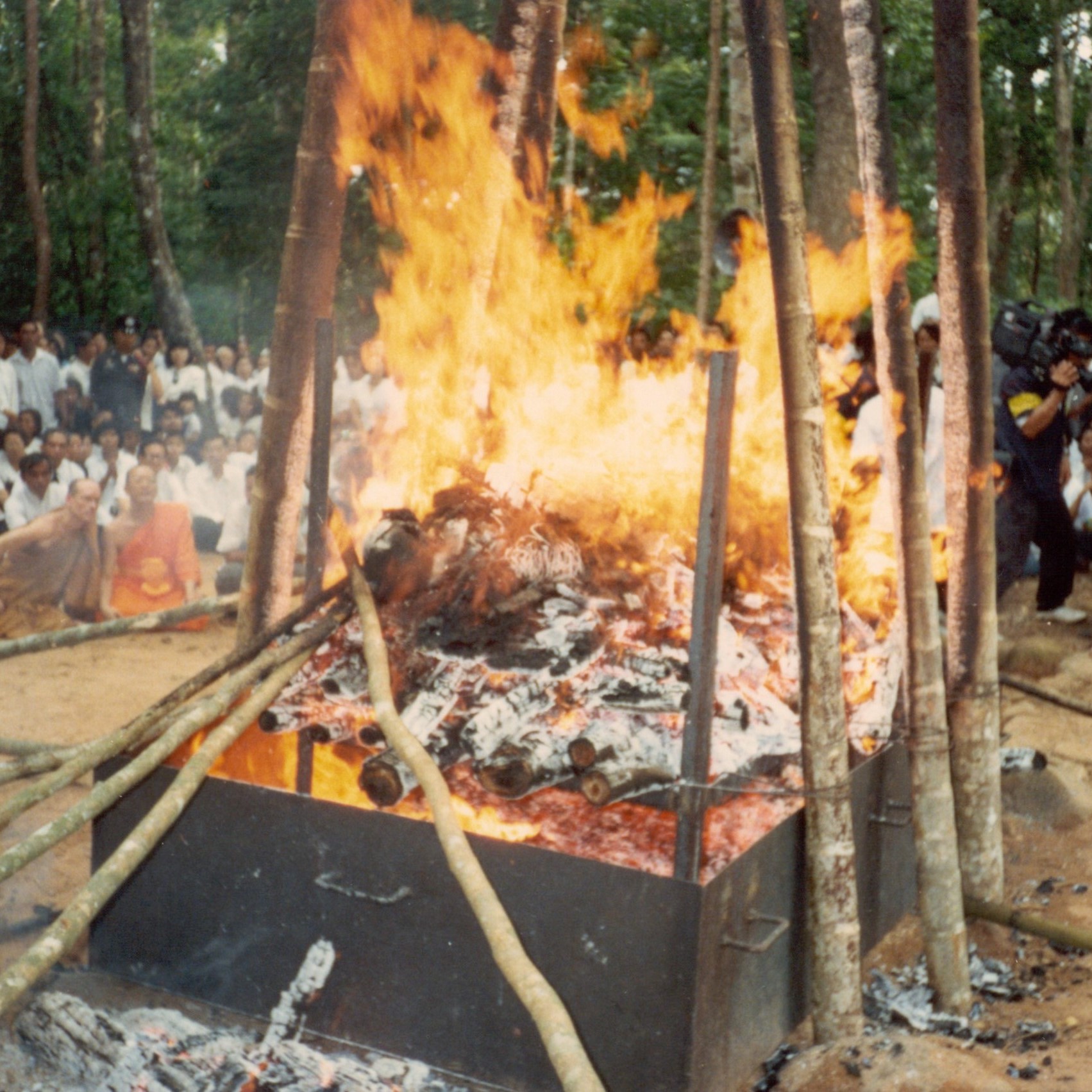