Excerpts of letters written by Buddhadāsa Bhikkhu to his younger brother, Mr. Dhammadāsa Banij, in 1931, shortly before moving back to his southern home province of Chaiya and founding Suan Mokkh. For more information on the formative years of his forest monastery, see his memoir written in 1943, The First Ten years of Suan Mokkh.

“I cannot tell the exact date of my coming back home, but I have definitely changed the view I once held. This is because I fortunately discovered some good scriptures that helped me decide resolutely: I will leave Bangkok which I once thought was proper for my stay, and this will be final. I intend to find a retreat that is far from external and internal disturbances so that I can scrutinize the Dhamma subjects that I have already learned and hopefully add to them. When I have finished with them, refreshed my memory, and come up with Dhamma principles enough to make sure that my research will not go astray, I will abandon all of my textbooks which I have loved and carried along, without exempting even a single copy. I will then lead a light and free life and search for purity and truth. I am not sure where I will stay. If I cannot discover even the most elementary things that I want, I think that I will associate with people who can be an incentive for my quest as the yogis in India. With this thought, I am looking for a retreat where I can temporarily stay and work with my textbooks for about five or six months...

I have had a piece of good luck, one which I think is good to the point of being invaluable: I met a friend who shares my view of life without ever having prior discussion. Both of us have the same intentions for future work; now we have equal physical and mental states. And if we are more fortunate, the two of us may be able to work together.

We have resolutely determined that Bangkok is not the place to find purity. The mistake we made in enrolling in the ecclesiastical Dhamma study is a blessing, for it makes us aware that we have made a wrong step. Had we not known this, we would have made many more; and, as some people have learned, it would have been difficult to retreat. With the awareness that we mistepped, we find the solution of how to step forward rightly.

We have followed the world from the minute we were born to the minute we had this feeling. From now on, we will not follow it but will part from it to find purity and follow the trail of the ariyans which we have finally found. If we still stubbornly follow the world, we would lag far behind and would never catch up with it even if we were reborn for one hundred thousand more times. Now we will never follow it. We will depend on it just physically, but we will try our best to detach from it spiritually so that we can find purity in the moment.

We also find that concern about relatives, friends, and disciples undermines the success in finding peace and purity, which are exactly what we mean to bring back to the concerned people of ours. With the worry, we may probably die before succeeding. So we will follow the Buddha's example which He described in His own words that He went out to find purity while His parents were tearful due to reluctance to let Him go. (In the Pali Canon, we have never found the statement that the Buddha secretly left His family.) Having made this decision, we feel relieved of one more worry. We also hope that our relatives can accept this decision too, although both parties may never see each other again...”

“My situation is now changing rapidly. Dislike of shameless monks and dislike of Bangkok has spread from one person to others; their number is growing, totaling two, three, and more. I am quite surprised because I have never expected that others would believe me and follow my practice – they have completely changed their view and stepped up their sacrifice. For example, firstly they are not afraid of their masters' getting angry with them, secondly they are not afraid of letting their parents down, and finally they are not afraid of death if they just can follow the path to purity. I know only that what was and is now being popularly practiced will not lead to seeing the Buddha...

I am totally in the dark about where, if not our own home village, to ask for a proper place for study. First on my list is none other than our own village, Phum Riang. Therefore, I would like to ask you a favor: I need someone who will help me have the most chance of study. Everyone should consider as if I were not staying in Phum Riang at all. For boarding, please make a little change from before, that is, if nothing is available, cooked rice offered mixed with dashes of fish sauce will be all right. Disciples of the Buddha never ask for more than this.

I have proved to my friends that almost all of the arahants lived on cooked broken grain rice mixed with only a little vinegar or acid liquor of pickled vegetables. We who eat cooked whole grain rice with fish sauce are better off than they, who had only vinegar as the condiment. We are experimenting with our food and feel that there is no problem in continuing the practice...”

Note: The original pieces of these two letters were once kept by Mr. Dhammadāsa Banij but have now been lost. Originally published in the book Life and Works of Buddhadāsa Bhikkhu by C.P.T., pp. 35-41, they were translated into English by Mongkol Dejnakarintra and published in The First Ten Years of Suan Mokkh.

Photograph: "Buddhadāsa Bhikkhu in Bangkok (circa 1930)," from the collection of the Buddhadāsa Indapañño Archives (Ref. BW-01-012_001) 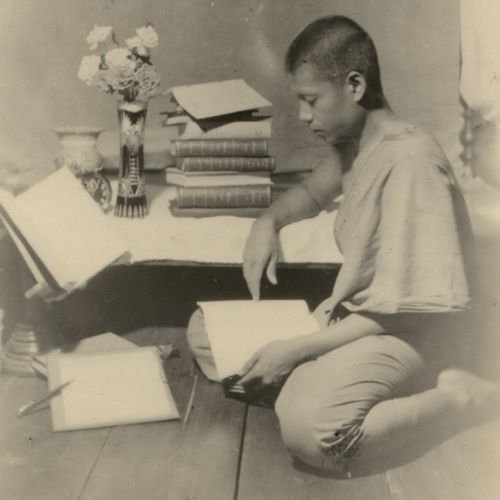