Reflections by Luang Por Sumedho in response to the question, “We heard that in the 1970s you went to Suan Mokkh. Was it just one time or several visits?,” offered to volunteers and staff of the Buddhadāsa Indapañño Archives (‘Suan Mokkh Bangkok’) on 13 January 2015 and first-published here on the occasion of the 88th Anniversary of Suan Mokkh.

I’ve always regarded Ajahn Buddhadāsa, along with Luang Por Chah, as one of my primary teachers. I could relate to their way of teaching because it was so direct and simple. Ajahn Chah wasn’t intellectual at all – he hardly ever wrote anything – he always emphasized paṭipadā, practice. He said, “In Thailand monks read too much. They learn Pāli and Abhidhamma, but they don’t ever practice.” So he was trying to fill in a gap there by emphasizing paṭipadā.

In the 1960s Tan Buddhadāsa was very controversial in Thailand. He wrote a book called Tua Goo Khong Goo, which translated into English as Me and Mine, but everybody was shocked by this because it’s a coarse way of saying “me and mine.” I was teaching English for a while at Thammasat University in Bangkok before I ordained, and there they were talking about this monk and his book. I was trying to learn Thai and thought, “What’s wrong with that?” Of course Americans don’t have that structure, so it was quite unique to me. But then I realized Buddhadāsa was trying to shock Thais into trying to appreciate their own religion, kind of shake them up, because in those days, in the ‘60s, every Thai considered themselves a Buddhist, but it was a very ceremonial tamboon taam prapenee (traditional merit-making) kind of thing, and they didn’t know very much beyond it.

Before ordaining I studied with Tan Chao Khun Chodok, who led a meditation movement at Wat Mahathat in the Yup-Nor Pong-Nor style (focusing the mind on the surface of one’s abdomen as it rises and falls in time with one’s breath). In the morning I’d teach at Thammasat University, then I’d cross the street to Wat Mahathat and sit samādhi (meditation). So that was starting to take place, he was teaching even laypeople to meditate.

I became a bhikkhu in 1967 and went to Wat Pah Pong in Ubon for my first phansa, the rains retreat. I didn’t speak any Thai nor the Isaan dialect they use there, so I didn’t know what was happening most of the time. Luang Por Chah didn’t know any English at all, but there were two Thai bhikkhus who could speak English. So the first month these two monks would help translate and I would talk with Ajahn Chah, and he would instruct me through their translations. Then after a month these two bhikkhus left and I was there without any English-speaking people around me.

Luang Por Chah was always very good at saying things like, “to observe yourself, observe what arises in your mind.” Of course, when you’re thrown into a situation so extreme from what you’re used to – suddenly you’re in northeast Thailand in a very strict monastery with a discipline – it brought up all kinds of emotions. Because I’m from the United States, from California, I was used to a totally different expectation and lifestyle, and I felt a lot of negativity, just critical mind, and being confused and misinterpreting things. But Ajahn Chah’s genius was to get me to look at what I was thinking. Not to believe it but just to observe it in this anicca (impermanence) practice, the conditions of arising and ceasing. And so I could actually do that.

Luang Por Chah never physically met Ajahn Buddhadāsa, but he liked his teachings, so we had a lot of the literature from Suan Mokkh. They were publishing some of Buddhadāsa’s teachings in little thin pamphlets, and Ajahn Chah always encouraged us to read those. I learned to read Thai by reading, kind of translating or understanding Buddhadāsa. After three years at Wat Pah Pong in Ubon, you’re allowed to go on tudong, a wandering practice, so I went with a Thai monk from there to Suan Mokkh and met Tan Buddhadāsa. I don’t think he had heard of Ajahn Chah, but Ajahn Chah always praised him because the way Ajahn Buddhadāsa would teach was getting you to look at what happens in the mind, and this was very much Luang Por Chah’s approach. I might have been the first Ajahn Chah monk there, I don’t know, but I tried to explain to him that he had a great friend in Ajahn Chah in Ubon Province.

I went to live in England in 1977, and I lived there for thirty-four years, but I always came back to Thailand every year to see Ajahn Chah. And during that time when Tan Chao Khun Buddhadāsa was still alive, I’d usually go to Suan Mokkh. I know Ajahn Poh, Ajahn Ranjuan, and Santikaro. In fact, I think I gave a retreat there.

In Ubon, northeast Thailand, some of the village people around Luang Por Chah were illiterate – they couldn’t read or write – but Luang Por Chah was teaching them meditation. The rice farmers were saying, “You know, we were told that you had to become a monk to meditate, and that all we can do in this life is tamboon – make merit and hope for a better rebirth.” But Luang Por Chah was very much saying, “No, don’t believe that,” and he was getting quite a lot of ordinary village men and women practicing meditation.

From that developed a sangha, a monastic sangha, and it was really impressive, such a pure, accurate take on the Buddha’s teaching. This really impressed me because to a Western person, Buddhism is an ancient religion, it’s older than Christianity. So you think, “Well, it’s probably out of date.” You get these ideas that somehow religion advances. Americans believe in progress as our reality, so we’re improving everything. So the idea that this profound teaching of 2,500 years ago was still workable in modern Thailand or Britain was because it is based on a common reality of suffering. This is a common experience that all human beings have. It’s not about ancient Indian culture or archaeology or Europeans or Asians, but about the human experience.

Then the Buddha takes something like suffering, dukkha, and says it’s a Noble Truth. This was an astounding thing to be doing because humans think that suffering is a nasty fact of life, and we want to get rid of it. So we’re always running around trying to find happiness and security in the things that are always changing, and of course we end up suffering more. So just changing the attitude towards suffering is what the Buddha did. Not to get rid of it or blame it on anybody, but to recognize it. That’s sati-sampajañña (mindfulness and clear comprehension). Then you’re no longer looking at suffering from aversion and wanting to get rid of it or blaming it on somebody else, but seeing what it actually is in the present moment: the saṅkhāras (formations) arising and ceasing. That’s brilliant!

And that’s why it works in modern countries – the Western affluent world – because it’s a wisdom practice. It’s not a metaphysical religion where you have deities. It’s based on a Noble Truth, not on a metaphysical truth. So you start out with something so banal, so ordinary like suffering, which we can all relate to, and which is not difficult to observe. I do suffer, thinking about this or worrying about the future in all kinds of ways. In affluent countries they suffer a lot because they worry all the time; they’re stressed and they create endless problems. We become quite neurotic when there’s a kind of safety net – an illusory safety net – like good government, an economy. We got this illusory sense of safety so you don’t have to strive to survive. You can just ride along in established institutions, and just become crazy.

This is what happens, this is what neurosis is – it’s just endless creating problems in your mind out of ignorance. The Buddha said, “Avijjāpaccayā saṅkhārā, saṅkhārapaccayā viññāṇaṃ” (Conditioned by ignorance, formations arise; conditioned by formations, consciousness arises). Avijjā is not-understanding Dhamma, not-knowing the Four Noble Truths. Whatever we do, as long as we operate out of avijjā, we’re going to end up with dukkha. And you don’t have to believe, you just begin to observe it in your mind. You can see it in your own mind. If I operate from an ego wanting to get something I don’t have, or wanting to get rid of something I don’t like, then it always ends up in some kind of anguish or disappointment or anger.

Ajahn Buddhadāsa put us on nibbāna, enlightenment. He used to be criticized for this, I remember, because he was taking a word that is raised up to be a high attainment. In most Thai and in Western people’s minds, nibbāna is a great attainment, a reward after years of hard work. But Buddhadāsa brought it down to non-attachment, awareness, to the ordinariness of life. I’ve known Thai monks that when I mentioned Tan Buddhadāsa, they would start fulminating with anger. One time I was sitting next to one on a bus, and I said, “I quite like Buddhadāsa,” and I thought he was going to strangle me, it was scary. Over what? Over nibbāna.

You see this in both Western monks and the Thai, because the thinking mind divides everything like language and thinking as a form of division: this is big, this is small. So it’s meant for comparing saṅkhāras and dealing with the world. But for nibbāna, the thinking mind is useless. You cannot conceive it and define it. When you try to define it, you end up with nothing much, and you still don’t understand what you’re talking about. But you can realize it, you can know nibbāna. You can’t confine it to a definition, but you can know it. And that’s what sati-sampajañña and paññā allow us, to be able to do that. That’s pretty good because when we think of the human problem, I used to think it was impossible, because you’re so conditioned to limit yourself to the physical form, to the body, and to your own sense of yourself, your ego, and your social, cultural conditioning. You tend to operate always from conditions that were instilled through ignorance, not through wisdom.

You’re living in this sense world where you’re constantly having to deal with things that you see, hear, smell, taste, touch. You feel, this is about sensitivity, you have to feel everything. Once you’re born – and until you drop dead – you have to feel life, and that means pleasure and pain. It isn’t about just pleasure: you’ve got pleasure, you’ve got pain. When you think of the language, the thinking process, it stops at one point, and you have to let it go. Just rest in mindfulness. There’s a discerning ability from that, to see things from a wisdom level that is not personal. You can’t claim that it’s some kind of personal property. It’s universal wisdom, natural wisdom.

Photograph: "Ajahn Sumedho with Tan Ajahn Buddhadāsa" taken on 31 December 1991 at Suan Mokkh, from the collection of the Buddhadāsa Indapañño Archives (Ref. S-246) 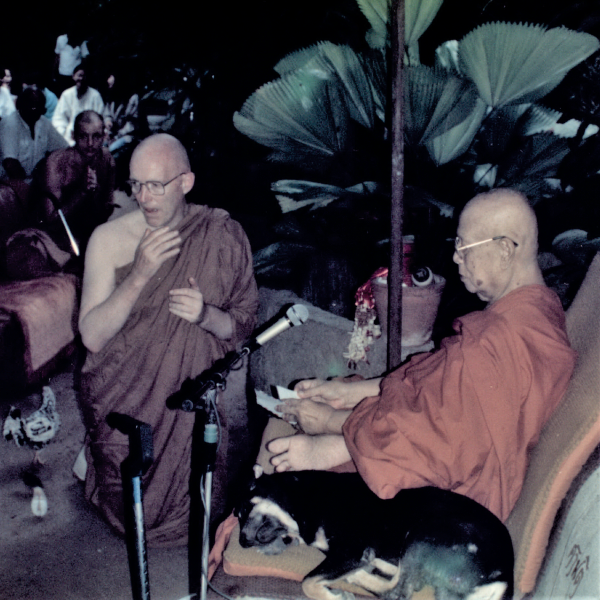