Excerpts from Als ich verlor, was ich niemals war: Wie der Buddhismus mein Leben verändert hat (Petersberg, Via Nova, 2019) by Matthias Dhammavaro Jordan ([email protected]), as translated from the German and prepared in collaboration with the author by the Buddhadāsa Indapañño Archives in May 2020 on the occasion of the 88th Anniversary of Suan Mokkh.

The last day had come, and today Ajahn Buddhadāsa would give us a lecture to say goodbye. After breakfast, we gathered at Lan Hin Kong, the stone circle. Large stones on which one could sit were arranged in a circle. Around the area large trees grew on sandy ground. In the meeting area was a raised wooden platform, carved out of a large tree root on which the monk who would be giving a lecture would sit. That was the custom here.

Ajahn Buddhadāsa was already eighty years old, had a rounded body, and was dressed in the orange robes customary for Buddhist monks. He slowly approached the platform, supported by a wooden walking stick, and took his seat. He had a clear, very collected and calm charisma, and as I write this, I know that I cannot capture how I experienced him. But suddenly I felt a deep connection to this man. No, he was not a stranger to me, everything here was not strange to me, and in fact, it felt as if I had arrived home. This was quite a surprise to me. We sat on bast mats on the floor and were asked to bow three times, which was also the custom here.

He started speaking in Thai and Santikaro translated:

“Dear friends in the Dhamma. You came from many countries around the world and you travel from one place to another – to find something, to find what? You are all looking for joy, happiness, and fulfillment and trying to get it out there somewhere. Then at some point you realize that there is nothing to get, and then travel on in the hope of finding your happiness and fulfillment somewhere else.

After all that, you ended up here in Suan Mokkh and have now experienced these days. I hope you have found some inner peace; perhaps you have realized that suffering and discontent arise whenever we cling and hold onto something. Everything that exists has three universal characteristics: it is subject to change; if we hold on to anything, suffering arises; there is no ‘self’ existence or essence, and there is no permanent ‘I’ or ‘mine.’”

He spoke for a while in this calm, friendly and clear manner and said goodbye to us with his best wishes. No, I didn't have to understand everything I heard there, but suddenly I felt deep trust in this man. He insisted that one shouldn't believe anything, and didn't call himself a teacher, but a kalyāṇamitta, which means spiritual friend. If one didn't understand something, he advised us not to throw it away immediately, but to put it aside in order to pull it out and contemplate it again later. All of this suited me very well.

Later I had a dream which symbolizes the attitude he took as a spiritual friend: I dreamt that we were going up a hill together and reached the top. Suddenly I was flooded with an incredible feeling of happiness. I stretched my arms up and bright rays of light and lightning poured right and left from the trees into my hands, into my body and charged me with an incredible feeling of happiness, and I felt connected to the whole universe. As I experienced this, I was filled with deep gratitude and great joy. Ajahn Buddhadāsa stood a few meters in front of me, and as I walked up to him to hug him and thank him for this experience, he held up one hand and only said: “I had nothing to do with that!”

The ten-day-retreat came to an end and the silence was “broken.” It was strange to feel as if I had gotten to know many of the participants well, although I hadn’t spoken to most of them. I thanked Santikaro, Ajahn Ranjuan, made a donation, and said goodbye...

Even though I have disrobed after twelve years of having been a monk, I still feel great respect for this way of life, especially in today's world, where materialism and the hunt for more and more is out of control, whereas monasticism proposes another way of life. It might be seen as a symbol of modesty and the abandonment of everything superfluous, with the clear message that one can live life in harmony with nature and its laws, and that one can get by with life’s basic necessities such as clothing, food, a roof over your head, and medicine in the case of illness.

I have often heard the question: “What are they (the monks) actually doing?” But perhaps the following question is much more appropriate: “What are they actually not doing?” They do not kill and hurt, they do not lie and cheat, they do not threaten anyone, they do not exploit nature, but use their lifestyle to indicate that there are other values which are worth living for, such as compassion, joy, love, serenity, trust and wisdom.

And finally, a path of training is offered to attain freedom from suffering, which can arise from the insight that you are invited to let go of all things that will fall into impermanence anyway when the time has come. Or, as Tan Ajahn Buddhadāsa used to say: “Nothing whatsoever is worth having, being, becoming or clinging on to!” 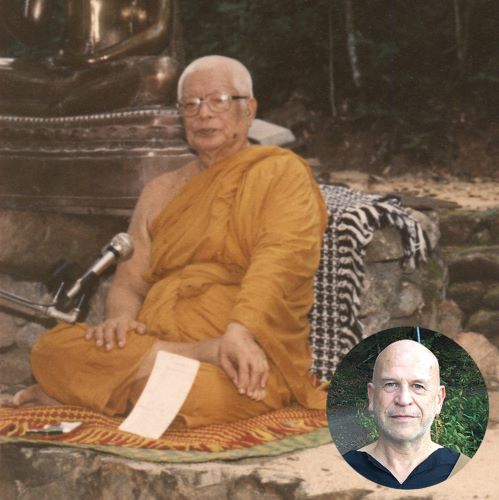