In honour of the 111th birth anniversary of Buddhadāsa, keynote speech by Dr. Chen-huang Cheng (Amala Association, Taiwan) presented at The 8th International Buddhist Research Seminar & The 2nd International Conference on Buddhadāsa Studies, held on 24-25 May 2017 at the Buddhadāsa Indapañño Archives, Bangkok.

ABSTRACT: Gift of Dhamma excels all gifts because Dhamma can solve the root of sufferings and saṃsāra. Among the various Buddha dhammas, anattā or Suññatā is the gist which underlines the three learnings of sīla, samādhi, and paññā. Master Hui Neng, the Sixth Patriarch of Chinese Ch’an School, based his teaching on the idea of self-nature to promote the practice methodology of non-thinking, non-phenomenon, and non-abiding. His followers developed his idea into the so-called Ch’an School which has flourished for more than 1300 years until today, and greatly influenced China, Korea, Japan, Vietnam, and even world culture today. On the other hand, the Thai Bhikkhu Buddhadāsa is regarded as one of the greatest thinkers on earth, and the greatest figure since Buddhaghosa of the 5th century in Theravadin world. He delved into the Tipiṭaka, and interpreted Buddha-Dhamma with plain modern language. He unveiled the renaissance movement in modern Thailand. His unparalleled concept of Suññatā renders the only amrita to all human problems. People of all lives and ranks can be freed of sufferings by applying this idea at all moments including daily life, work, family, interpersonal relations, emergency, and even at the time of dying. These two great masters were the milestones in the history of Chinese and Theravadin Buddhism with a time lag of twelve and half centuries, and a spatial distance of thousands of miles. Their thoughts and practice still guide people today. Although they didn’t know each other and could not have dialogue together, I’ll try to bridge the dialogue from the viewpoints of their concepts.

Most Venerables, and dear friends in the Dhamma:

It is a great honour for me to present my keynote speech here on the topic of “Intra-Buddhist Dialogue.” We come from different corners of the world, and we follow the different traditions of Buddhism. To further mutual understanding among Buddhists, we need to undertake intra-Buddhist dialogue. In terms of religious dialogue, we have the interfaith dialogue, and the intra-faith dialogue. I want to take the example of Patriarch Hui Neng’s Concept of Non-thinking and Bhikkhu Buddhadāsa’s Concept of Suññatā to describe how we can communicate with each other.

These two figures are giants in the Buddhist world. Hui Neng was the thinker of renaissance movement in China in the 7th century while Buddhadāsa was the thinker of renaissance movement in Thailand in the 20th century. They are quite remarkable. They are down-to-earth practitioners of Buddhism in daily life, not only of thought in brain, but the practice of Dhamma in speech, in actions and in one’s daily life.

I’ll try to present the similarities and diversities of their ideas on non-thinking and Suññatā. Further researches are recommended.

From the viewpoints of Master Hui Neng, seeing self-nature means attaining Buddhahood. As we know well, in Mahāyāna Buddhism, the attainment of the Buddhahood is to become a Buddha, the ultimate enlightenment.

According to “The First Chapter of Life Stories” in The Platform Sūtra,[1] the Sixth Patriarch, upon invitation, left Bao Lin Temple, and entered Shaozhou City to give Dhamma talks at Da Fan Temple. At the very beginning, he told the audience: “The bodhi self-nature is originally pure. One can become a Buddha by just making use of this Mind.” Here, the meaning of self-nature could not be understood from the viewpoint of the original or sectarian Buddhism, or the older stage of Mahāyāna Buddhism. It should be understood from the viewpoint of tathāgata-garbha, otherwise we’ll misunderstand the meaning of self-nature. These two sentences are the fundamental view of The Platform Sūtra as well as the key point of the instantaneous practice and instantaneous enlightenment. Instantaneous practice and instantaneous enlightenment are contradictory to the so-called gradual practice and gradual enlightenment in Chinese Buddhism.

WHO, WHEN, AND WHERE ARE THEY?

Hui Neng was the real founder and the sixth patriarch of Chinese Ch’an School. He was the reformist and promoter of earthly Buddhism in 7th century China. At that time, the Buddhist monks spent most of their time in the study of Tipiṭaka. They were rich in their brains, but they might have neglected some points of the real practice in daily life. In this context, Hui Neng gave a very real perspective to the practice of Buddha-Dhamma.

Hui Neng was illiterate. He knew nothing from the book but he got enlightenment from his understanding of the bodhi of self-nature. He had only one analects: The Dharma Treasures Platform Sūtra of the Sixth Patriarch. This is the only Sūtra regarded by Chinese people as Sūtra, although many other Chinese monks wrote wonderful commentaries on Buddha-Dhamma, his teaching was collected and compiled and regarded as a Sūtra.

Bhikkhu Buddhadāsa was quite different. He was a learned scholar monk. His analects have boomed in different languages, in English, Spanish, German, Russian, Chinese etc. New books are coming up in the future. He was quite wonderful. He also translated Chinese commentaries into Thai language. The first was The Platform Sūtra. The second book was The Ch’an Master Huang Bo’s Dhamma Essence of Transmitting the Mind. The third title was a Mahāyāna Sūtra: The Laṅkāvatāra Sūtra which talks about the vijñāpti-matratā, a very deep philosophy in Buddhist psychology.

HOW DID THEY PRACTICE AND TEACH?

Hui Neng got enlightenment in three stages: The first stage is called sentimental enlightenment, just on listening to the reading of The Diamond Sūtra. The second stage is intellectual enlightenment, which refers to his very famous gāthā: “Bodhi has no tree originally, mirror is not a stand; actually all things are empty in self-nature, where can they get dusted?” The last third stage is the thorough enlightenment upon hearing his teacher, the Fifth Patriarch’s explanation of the sentence “Arise the mind by abiding nowhere” in The Diamond Sūtra. He taught the audience only orally. In his time, there was no modern technology.

But Buddhadāsa Bhikkhu was quite different. Buddhadāsa Bhikkhu spent 14 years solitary meditation in the southern Thailand jungle. He then spent 60 years teaching meditation and Buddha-Dhamma in the tropical rain forest. He studied the Theravadin Pāli Tipiṭaka mostly by himself. He taught students of different backgrounds orally and by means of modern technology.

WHAT ARE THEIR MAIN CONCEPTS?

2. Self-nature is originally neither born nor extinguished.

4. Self-nature has no movement, it remains peaceful all the time.

5. Self-nature is able to produce all dharmas. Because self-nature is pure all the time, if there are convergent factors, then dependent co-arising will bring out different phenomena.

As to Buddhadāsa, his main concept was Emptiness. He said in the book Heartwood of the Bodhi Tree:[2] “Emptiness is the core teaching of the Buddha. All different Buddha’s teachings can be summarized in one word: Suññatā [Pāli] (Śūnyatā [Sanskrit]) which means voidness.” Voidness means non-clinging or non-attachment to any phenomenon, even the concept of “me” and “mine.”

Hui Neng promoted the idea of paññā-pāramitā which means the transcendental wisdom to know that all things are non-dualistic and thus equal. There is neither suffering nor happiness, neither existence nor non-existence, etc. This is the transcendental wisdom. He also promoted the idea of non-thinking, non-phenomena, and non-abiding. Non-thinking doesn’t mean no thinking, but you think without clinging, without the idea or concept of “me” or “mine” in the words of Buddhadāsa. Non-phenomena don’t mean there is no phenomenon, but all phenomena are dependent co-originated, therefore all phenomena are void in their self-nature. Non-abiding doesn’t mean that we need not follow the triple gems to practice, but we should not abide in any concept. We should be free from the attachment to any idea, even the idea of the Buddhas, if we want to be fully enlightened.

He also explained the so-called Five-factor dharmakāya fragrance of the self-nature. This means that the self-nature itself has the five factors of Buddhahood. What are these five factors? They are the sīla (precept), samādhi (concentration), paññā (transcendental wisdom), vimokkha (liberation), and the view and knowledge of vimokkha (liberation). From the viewpoint of Master Hui Neng, these five factors are inter-penetrated and inter-being, one is five and five is one. There is no difference between them, they are actually one, although we can describe them from five perspectives. In the last chapter of The Platform Sūtra, Hui Neng asked his followers to assemble and told them: “After I die, if somebody asks you any question, how should you answer? You should apply the concepts of 5 skandhas, 12 entrants, 18 elements, and the very important 36 relative dharmas.” What are relative dharmas? For example, if somebody raises the question of sky, you must answer earth because sky and earth are relative but actually one. If somebody asks you the concept of daytime, you must answer nighttime because daytime and nighttime are the two parts of one day. If somebody asks you the question of birth and life, you must answer not only birth and life but also death, because death is a part of our whole life. This is the idea of non-dualism. He also promoted the idea of Ultimate Reality. Ultimate Reality is purely free from any concept. We have to understand Ultimate Reality from different angles, for example, phenomenon, essence, nature, force, function, cause, conditions, effect and equality. All of them make up one reality, the so-called Ultimate Reality. For example, all of us, including the tables, the chairs, and other equipment, make up this auditorium. Nothing can be left over. This is the so-called Ultimate Reality. We have to realize the Ultimate Reality that we are one. Although we are different, we are one, we make up unity.

Firstly, at the time of arising of touch and sensation. For example, when our eyes contact with a visual object, we have to be aware of the eye-consciousness which is dependent co-arising, and consider that the eye-consciousness is not the truth! We have to be free from the sensation of craving, or emotion and any other sensation. No illusory thought should arise at the time of touching and sensation.

Secondly, at the time of practicing calm and insight meditation. Calm down our turbulent thoughts, then use the peaceful mind to examine the impermanence of all objects. In this way, we can gradually abide in emptiness.

Thirdly, at time of dying. At time of dying, we can abide in emptiness, just realizing that all phenomena are ever-changing and empty in nature. 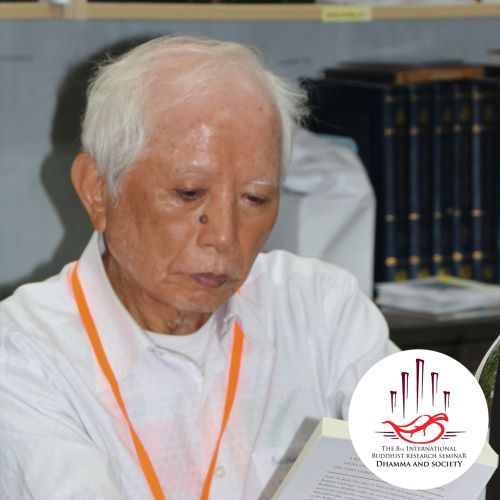